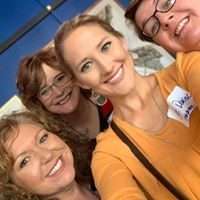 Middle School teachers having some fun on a Field Trip 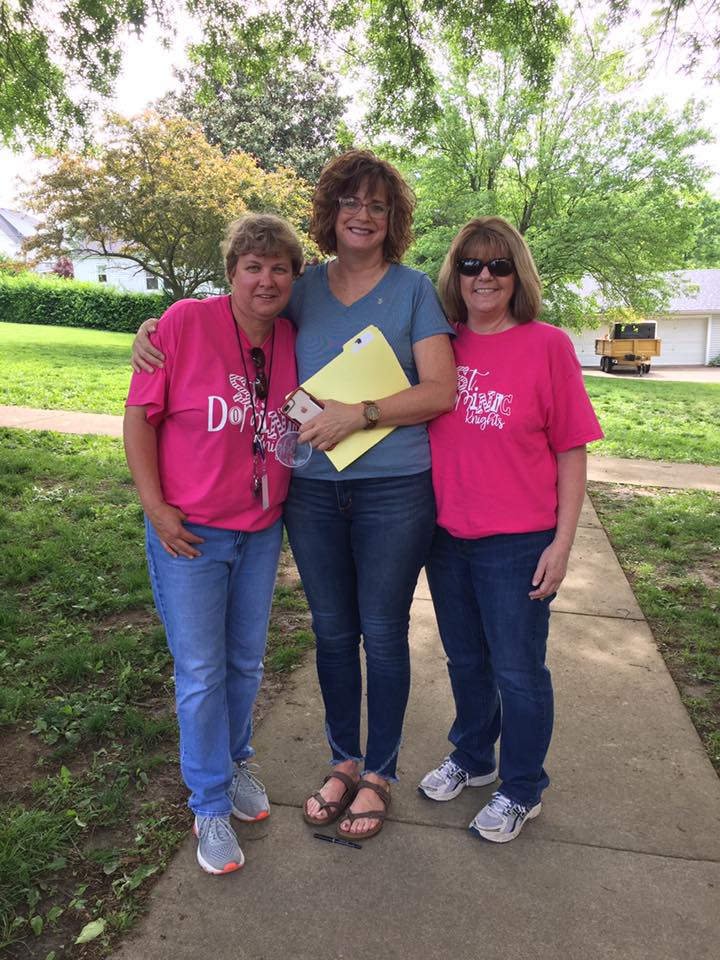 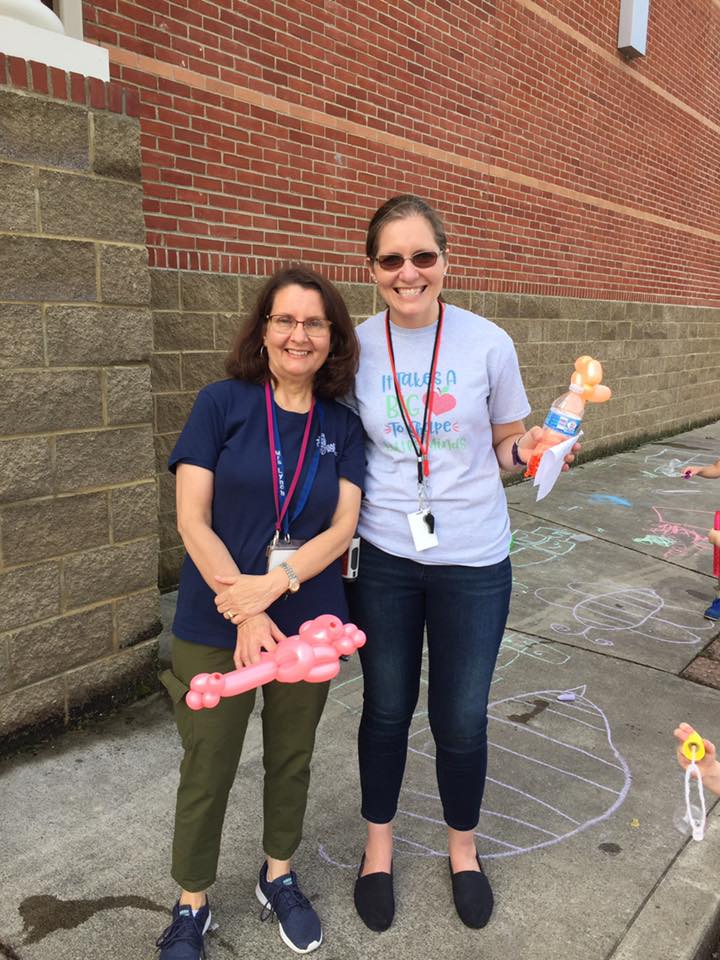 Mrs. Breunig has served as Principal since 2002. Prior to coming to St. Dominic, she taught English at Marion County High School for nine years. She holds a Bachelor’s degree from Western Kentucky University, a Master’s degree from the University of Kentucky and a Rank I in Administration from Eastern Kentucky University. A Marion County native, Mrs. Breunig attended St. Augustine Grade School and Marion Co. High School. She lives in Springfield with her husband, Larry, and two sons, Jack and Reed, who are students at St. Dominic. She is an avid UK fan (Go Cats!) and especially loves attending UK football games and tailgating with her family. She also enjoys watching her children play sports.

Mrs. Chelf retired from teaching at St. Dominic in 2017  but has stayed on as the Director of Special Education . Prior to her 17 years at St. Dominic, Mrs. Chelf spent 29 years in the Marion County public school system where she taught grades K-4 and Special Needs. She is a graduate of Brescia College in Owensboro and Eastern Kentucky University. She lives with her husband, Frank, in Lebanon; they have three children–Amy, Erin and Trey–a Her hobbies include reading, traveling, spending time with her family and taking part in community theatre, most recently at The Opera House in Springfield.

Mrs. Abell’s teaching career began as the first full-time lay teacher at St. Dominic School. After teaching for a number of years, she decided to stay home and raise her family while continuing to be a substitute teacher at both St. Dominic School and Washington County. After the death of her husband, Dickie, Mrs. Abell returned to the classroom as an instructional assistant in 1991. She is the mother of four children–Chuck, Jane, Michael and Leonard–and the proud grandmother of nine.

Ms. Drury has been teaching Science to all grades since 2018.

Mrs. Fenwick has been the Health/P.E. teacher at St. Dominic School since 2002. She is also employed part-time at Hale-Polin-Robinson Funeral Home as a licensed embalmer and funeral director. She is married to Steve and has two children, Dallas and Teresa. Mrs. Fenwick spends her spare time as a St. Dominic CCD teacher, Youth Group leader, K4J activity leader, Grief Support leader and girls’ basketball and softball coach. She is an avid U of L fan, enjoys outdoor activities and spending time with family and friends. Mrs. Fenwick also loves turtles.

Mrs. Graves started is the Pre-K (3 year olds),  the Director of Preschool and of the After School Program (ASP). “Mrs. Crystal” is married for to Michael Graves and has one daughter, Celeste, and a son, Connor. She holds an Associate’s Degree in Early Childhood Education from St. Catharine College. In her spare time, Mrs. Graves enjoys spending time with her family, outdoor activities and reading.

Mrs. Graves has been teaching at St. Dominic School since 1996. She also taught preschool at Small World Daycare in Springfield for eight years. She is married to Tim and has two daughters, Elizabeth and Emilee, and one son, Jacob. They reside in Springfield. In her spare time, Mrs. Graves enjoys getting on the computer, reading, cooking and spending time with her family. She loves to travel all over the nation to watch and help her two youngest children show their Simmental cattle. Mrs. Graves graduated from Campbellsville University with a Bachelor’s degree in Elementary Education. She also received her Master’s degree from Campbellsville University.

Mrs. Grider started teaching as a second career in 2005 after having worked as a bank examiner for the State and as an account manager for Armour Foods. She currently teaches Technology (K-8); Pre-Algebra (7th); Algebra (8th); and Language Arts (8th). Mrs. Grider holds a Bachelor of Business Administration with a concentration in Finance from the University of Kentucky and a Masters in Teaching from Bellarmine University. She attended St. Dominic School as did her husband, Jerry, and her two sons, Bob and Mark.

Mrs. King has been at St Dominic since 2019 but has 27 years experience teaching.

Mrs. Lynch has been an Instructional Assistant at St. Dominic School since 2000. Before coming to St. Dominic, she worked in banking. She is married to Tom Lynch and has one daughter, Emma Lou. They reside in Springfield. In her spare time, Mrs. Lynch enjoys reading, cooking, travel and spending time with her family. She is originally from Pennsylvania and returns there every summer to visit.

Mrs. Mattingly has been the custodian and safety coordinator at St. Dominic School since 2005. Before coming to St. Dominic, Mrs. Mattingly returned to college at St. Catharine where she received her Associate in Applied Science degree, majoring in the Medical Office Assistant program. She is married to Tim and has two children, Travis and Lauren, and she resides in Springfield. In her spare time, Mrs. Mattingly enjoys quilting, sports, coaching and spending time with her family.

Mrs. Deanna has been teaching Kindergarten at St. Dominic School since 2012. She is married to Michael McElroy and has one daughter, Kaylee Grace, and a stepson, Cody.  She and her family reside in Marion County. A graduate of St. Dominic School, Mrs. Deanna is happy to return “home” to work with some of her former teachers. In her spare time, Mrs. Deanna enjoys walking, spending time with her family and friends, reading, and looking for new, engaging ideas on Teacher Pay Teachers and Pinterest to use in the classroom. She has earned both her Bachelor’s degree in Elementary Education and her Master’s degree from Campbellsville University.

Ms. Mudd  teaches Middle School Social Studies and Religion.  Ms. Mudd believes the best part about teaching is the relationships that she has with her students. She has been married to Austin for 17 years and has two children, Shelby and JoHanna. Ms. Mudd’s favorite past time is spending time with her family. She also loves to read, bake, watch her girls play sports and repair antique picture frames.

Mrs. Murphy teaches our Preschool class and is the Sunday School Religion teacher.  She also is in charge of K4J which serves preK thru 6.

Mrs. Sallee is the 3rd grade teacher at St. Dominic School. She earned her Bachelor’s and Master’s degrees from Eastern Kentucky University. Having previously taught second, fifth and sixth grades, Mrs. Porter currently teaches the fourth grade. She is married to James Porter and enjoys playing cards, walking, sports and spending time with her nieces and nephews.

Mrs. Taylor joined St Dominic in 2019 but comes with 27 years of teaching in both public and Catholic schools.

Mrs. Walker is the Title I Reading/Literacy teacher at St. Dominic. She has been at St. Dominic for nine years. Before working at St. Dominic, Mrs. Walker taught for 27 years in the Washington Co. School system. She is married to Eric Walker and has two children, Joshua (Jacqueline) and Erica. She has one grandson, Ethan, who will attend St. Dominic in the very near future. Some of Mrs. Walker’s hobbies include reading, walking for exercise and watching movies on the Hallmark Channel. She loves UK but is not allowed to watch them play on TV because they always lose when she does!